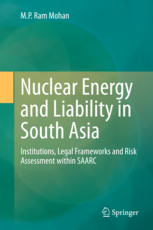 The book advocates pursuing a regional approach to nuclear risk framework, which it argues is more promising in the current scenario than the non-achievable global regime. In the development of international legislation on liability, the nuclear energy sector represents an alternative approach to a transboundary liability regime.

Building on this foundation and following the Chernobyl accident, international consensus was sought for a stronger transboundary legal regime in the event of a nuclear disaster. However, after sixty years of the existence of international nuclear liability laws and twenty-five years after Chernobyl, the primary objectives of the Conventions – harmonization and a global regime – remain unfulfilled.

Further, many countries are now creating or expanding nuclear programs without adequate transboundary legal protection. In light of these issues, a regional approach is an option that cannot be ignored. Given its rapidly expanding nuclear energy footprint, South Asia is in a unique position to adopt a regional mechanism.

You can obtain more information via the following link: